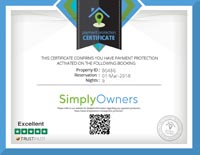 
Taking the lockdown into account, we expect holidaymakers and homeowners to follow current government advice with regard to booking rental properties. Our website remains 100% functional without any restrictions for:

Cottage ref : P27934
‹ ›
If this holiday cottage is unavailable we have thousands more carefully vetted and validated properties, look for more holiday cottages near Lamorna
from the owners direct on this site!

Book this Holiday Cottage by contacting the owner directly to confirm price, property details and availability.

Remember to ask the owner Laura Shaw for your SimplyOwners free payment protection certificate and avoid any booking fees!

Rosemerryn Cottage is situated within the grounds of Rosemerrynwood and sleeps 4/6. Standing in its own secluded garden, bordered by woodland, it comprises one double bedroom, one twin bedded room, a lounge with open fire, a kitchen-dining room and a bathroom, with bath and shower. There is a comfortable sofa bed in the lounge, and an extra bed or cot can be added to either of the bedrooms if required.

The cottage is equipped with a washing machine and central heating, and all heating and electricity costs are included in the price. A small rayburn in the kitchen keeps the cottage cosy and is useful for drying towels after a day at the beach. Its cooking days are over however, so there is an electric hob and oven and a microwave for cooking. Bed linen and towels are provided, but guests are asked to bring their own beach towels. Although the cottage has its own garden, guests are welcome to wander through all of Rosemerryn’s gardens and woodland, and of course to visit the Fogou.

A well-worn path through the wood provides a short cut to the local pub, The Lamorna Wink, and to the cove beach, where there is a small shop and a café.

Dogs are welcome, but please note that the garden is not enclosed, and we would kindly ask that dogs are kept on a lead in the gardens and wood.

Walking - There are numerous short or longer walks from Rosemerryn, both along the Coastal Path, and inland towards St. Buryan and Sancreed. East along the coast path, the pretty harbour of Mousehole is about an hour and a half’s walk, and Penzance about two and a half hours, while the spectacular beaches at Porthcurno and the Minack theatre are about three and a half hours west. Land’s End is about five hours walk.

Ancient Sites - The Boleigh Fogou, at Rosemerryn itself, is a good place to start, but the whole area is rich in Ancient History. The Merry Maidens, said to be nineteen maidens turned to stone for dancing on the Sabbath, stand in a field a few hundred yards along the road. Two taller, solitary stones, are said to be the pipers who played for them turned to stone as they tried to flee their punishment.

Another fogou can be found amongst the remains of an iron-age settlement at Carn Euny, where there is also a remarkable, round underground chamber made entirely of stone.

Chysauster is another iron age settlement, originally occupied almost 2000 years ago, where the foundations and some of the walls of the courtyard houses are still visible.

Chun Quoit, Boscawen un Circle, Lanyon Quoit and Men an Tol are just a few of the many others.

Museums and galleries - Penlee Museum and Art Gallery and The Exchange can be found in nearby Penzance and Newlyn Art Gallery in the fishing village just a mile west of Penzance. Penlee houses an extensive collection of paintings of the Newlyn School, as well as changing exhibitions. The Exchange along with the Newlyn Art Gallery both have a full programme of exhibitions. On the other side of the peninsular, in St. Ives you will find the Tate St. Ives, sister gallery to the Tate Modern and Tate Britain in London, and the Tate in Liverpool. A ticket to the Tate St Ives will also give you entrance to the Barbara Hepworth Garden and Museum where you can appreciate her works in the magical setting of her own peaceful garden. Both Penzance and St Ives, as well as Newlyn and St Just, harbour a wealth of smaller, commercial galleries and beautiful, individual shops.

Beaches and coves - There are a number of beautiful sandy beaches just a few minutes drive away, including Porthcurno and Porthchapel as well as the surfing beach at Sennen Cove. The picturesque, little harbour, aptly named Mousehole, is a short drive or lovely coastal walk away; or follow the stream through Rosemerryn Wood and down beside the single track Cove road to the even smaller and quieter harbour beach at Lamorna Cove.

Heritage - The medieval monastery of St. Michael’s Mount dominates the bay at Penzance. A thriving port for the tin trade, 2000 years ago, it became a destination for pilgrims in medieval times and today walkers can still follow ‘St Michael’s Way’, marked with a pilgrim’s scallop shell, from St. Ives to the Mount. Geevor Mine near Pendeen gives a taste of what life was like for the tin miners of yesteryear. The Telegraph Museum at Porthcurno will lead you through the secret WW2 tunnels that formed the communication hub of the British Empire.

Theatre - The Acorn Theatre in Penzance has a full programme of events, including plays, music and comedy nights. The Minnack Theatre, a beautiful open-air theatre built into the cliff at Porthcurno, has a continual summer programme which welcomes a huge variety of travelling theatre companies.

Gorgeous cottage with all the mod cons! There was even a bottle of wine and a home baked (delicious) cake waiting for us! Truly made my first trip to Cornwall unforgettable.

We had a wonderful week at Rosemerryn Cottage. It is beautifully located in a secluded area of Lamorna. Perfect for walks in West Penwith.

This is such a lovely place to stay.My boys loved playing down by the stream, it's peaceful and secluded. The cottage had everything we needed, it was clean and warm. Laura and Rob were fantastic hosts and we really couldn't have picked a better place. Lots of great memories made.